An Interview with Camillo Loriedo 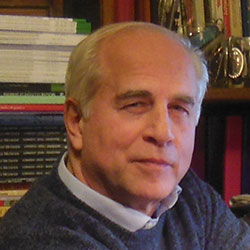 Camillo Loriedo, MD, PhD, is professor of psychiatry and psychology at the University of Rome, School of Medicine and the School of Specialization. Since 1998, he has been a member of the board of directors for The Milton H. Erickson Foundation. Having just served as president of the International Hypnosis Society, he recently was elected president of the Italian Society of Psychotherapy. He has been a member of the editorial board for the American Journal of Clinical Hypnosis since 2005. Professor Loriedo has been awarded the Milton H. Erickson Lifetime Achievement award for outstanding contribution to the field of psychotherapy. He has authored more than 350 scientific papers and 25 books.

The interview began after some banter about how Camillo believed there were plenty of people more qualified to speak about spirituality and psychotherapy. He relented because he sensed that I believed it would be good for the hypnotic community to know him better.

John Lentz:  How do you think of spirituality as being a part of what you do?

Camillo Loriedo: I think of the special way of connecting in hypnosis as being spiritual. The person really hears what the other person is saying. Psychotherapy is a special encounter, yet over time I developed the idea that hypnosis is more than psychotherapy; it is a special relationship.

JL: Speaking of relationships, at hypnosis conferences you seem to treat everyone that you encounter in a very special way. I have noticed how you are so kind and seem intent on being helpful however you can. You have accomplished so much, yet it clearly isn’t to impress anyone. You almost are reluctant to even acknowledge the amazing things that you have already done. Clearly, you seem to look for kind ways to treat people, just because you want to.

CL: (Laughs) Well, I am sure that I fall short, but I try to. I hope that I can be of assistance to people. I see the special relationships at these hypnosis conferences as family. At the conferences such as the congresses, it becomes a community and it is a pleasure being together. It is such a positive feeling. Many of these people I see and have seen for years at conferences. It just feels good to be with them.

JL: It is an amazing feeling to be with people who you see every year, and get to talk about something that you are so passionate about. Would you say a little more about the special relationship that comes from trance which is, in your perspective, spiritual?

CL: When in a trance, there is a special connection.  I want to be in deep contact with a person. I am very curious. I don’t know what will unfold but I am interested to discover.

JL: Your curiosity is respectful.  It invites the person experiencing it to feel encouraged to remain in a positive trance where they are more aware of their resources. You seem to go out of your way to be open and maintain such integrity that it is easy to appreciate your style of relating.

CL: A long time ago, I realized in talking with a schizophrenic that the more I was open with him, the more he was open with me. When I was young I thought I was supposed to be “hidden,” but I realized that was more about my ego than anything else. I want people to know as much about me as possible, not in an egotistic way but in a transparent way so they feel invited to be open as well. Nicole Ruyssschaert said in her keynote speech at the 12th International Congress of Hypnosis that hypnosis was probably much older than the 1800s. Hypnosis, in the beginning, was before any medication and was helping people all over the world in probably every religious group. It stemmed from our need for connections. I think of that as spiritual.

JL: That is a very good definition of spirituality as a profound connection, as well as a community of sorts that cares about each other. The creation of caring communities may be one of the healing aspects of religions all over the world. In that sense, you do a lot to create that caring community through your interactions with others.

CL: One of the differences that I see between Freud and Erickson is that Freud seemed to approach others from a perspective of fear, or seeing the negative in them. Erickson seemed to always believe profoundly in the positive that people have in them. He was always looking for that. I once wondered how it was that he always seemed to have such clients, patients, that were always ones that he liked. I wondered how he could have selected such people to see, and then it dawned on me that it was how he saw them, and then it made sense.

JL: Erickson seemed to realize the problems that people had were because of the negative trances they were spontaneously developing keeping them from seeing, doing, and being who they could be.

CL: That is because he was bringing out that positive aspect of people. He wasn’t so directive as people think. He was motivated by the positive in the person that he believed in and coaxed them into seeing what they could be and do what they could do. He was motivated to help them be free from what was limiting them.  He profoundly believed in people. I find that very spiritual.

JL: I do too, but then I also find how you treat people to be very spiritual and relational. You appreciate the larger community that has built up through the various organizations such as the International Society for Hypnosis, European Society for Hypnosis, American Society for Clinical Hypnosis, and The Milton H. Erickson Foundation, as well as others — in part because you have played such a large role in creating these communities. It is your positive belief in others and willingness to care that spreads and helps encourage communities to be so powerfully positive and caring about each other. While it is the integrity of all the people in the community and their willingness to share with each other, you have been a strong presence behind the scenes nurturing, building, planting and cultivating communities that cross boundaries of religion, nationality, age, gender and affiliations.

Camillo Loriedo will be presenting a number of seminars at Brief Therapy 2018, covering topics including anorexia, trauma and trance.