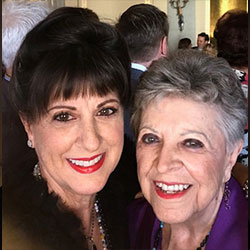 Dr. Norma Barretta, PhD, studied with Milton Erickson and has been teaching the use of hypnosis, neuro-linguistics, communication skills, personal growth, self-differentiation and the power of language since 1975. She is a partner in the Madrid- Los Angeles Erikson Institute and is frequently a faculty member for the Erickson Foundation Congresses. She currently teaches in Spain, Poland, Italy, Canada and for the American Society of Clinical Hypnosis in the United States. She is the recipient of a Lifetime Achievement Award from the American Society of Clinical Hypnosis. She has recently been learning about the power of sound from her daughter, Jolie Barretta Keyser, and is now using sound with some of her private patients.
She has taught for the International Society of Hypnosis and the European Society of Hypnosis.

Jolie A.C. Barretta Keyser grew up in the Barretta household where she was the subject of early experimentation in different methods of trance induction by her parents Philip and Norma Barretta. Later she was the demonstration subject for a seminar in Rome where she was prepared for the surgical removal of 4 impacted wisdom teeth, which were extracted without anesthesia after arriving in Los Angeles 2 days later.
She became involved in USA Gymnastics after studying pre-med Philosophy and Psychology at Cal State University Long Beach and the University of Florence in Italy. She then coached the United States National Gymnastics team working with 8 Olympians. She wrote “Body Alignment” in 1985 (Burgess Publishing) and taught seminars at the U.S. Olympic Training Center for Olympic athletes in various sports.
Nine years ago she began research and development in the field of Sound Healing and began practicing Cymatic Design in 2012. She has presented seminars on Cymatics in Europe and at the Globe Sound Conference in the United States.
Jolie is fluent in English, Italian, French and Spanish.

All session by Norma Barretta and Jolie A.C. Barretta Keyser

WS11 – Blending Hypnosis with Sound to Speed Up the Therapeutic Process